Looking for a unique aviation keepsake? These Made in Germany keychains are produced from pieces of real aircraft! Individually numbered, you can own a piece of history in your pocket!

We are thrilled to be bringing a real Viking home to you today: Gudrod Viking.

The Airbus A340-300 with Manufacturer Serial Number (MSN) 424 was registered as SE-REB and delivered to SAS Scandinavian Airlines in September 2001. After just two months of service, the airline re-registered the plane as LN-RKG, christening it Gudrod Viking and sending it to San Francisco, Tokyo and Los Angeles, to name just a few of its destinations.

From April to October 2019, another very special sticker adorned the plane with “Mao Sun” and “Xing Er”, two pandas from Copenhagen Zoo, greeting passengers with the words “Welcome to Copenhagen”.

Gudrod Viking – like the entire SAS Airbus A340 fleet – was retired in March 2020 after 19 years of service. Since then, the plane has been in Castellón, Spain awaiting recycling. Now the Viking has sailed north again to join the Aviationtag fleet. 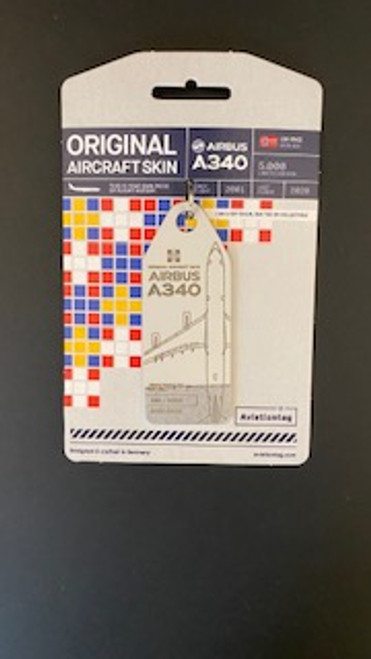